To round out the week, I worked an in-store demo for Act II Popcorn.  In honor of Cinco de Mayo, my job was to sample ACT II flavors Salsa Valentina and Queso Jalapeno.  The promo was fine, nothing special.  Standard sampling of product, handing out coupons and being friendly with customers. 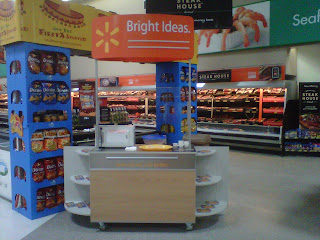 Unfortunately, there was a fellow sampler from another company that decided to carry a large chip on her shoulder!  You see, I was hired by Front Row to run the ACT II popcorn promotion.  This woman, lets call her "heavy shoulders," was an employee of Crossmark.  Heavy shoulders also happened to be the team lead.  I'm not exactly sure what happened, but it was nothing but one condescending remark after another from heavy shoulders.
Honestly, I knew this was a one day Random Day Job, so I refused to let heavy shoulders get me down.  I took one dig after the other, but continued to smile and say "sure thing" and "no problem."  It wasn't worth it to stoop to her level and have an attitude right back, I decided to hold my tongue instead.  I hope heavy shoulders finds some joy in her life, it's way too short to spend it tearing other people down!!

I just ignore negativity like that. A lot of the time I think they just wish they had our random day jobs lol

Thanks for the encouragement Diamond Girl, I did my best :)

Greer Carlson
My life is Random, more random than I would have ever dreamed. I married an amazing guy, but this amazing guy has a job that moves us around. Seven times in two years to be exact! Moving that many times makes success in a career a bit of a challenge, but I’m up for it! My plan is to make a steady income off Random Day Jobs. I’ll stick with jobs I know including on camera work (commercials, hosting, corporate videos, etc), promotional work as a brand ambassador, tradeshow spokesmodel and writing, while remaining open minded to new things! I'm going to share my journey. Hopefully, I can make some money, but at the absolute least, maybe I can inspire someone to think outside the corporate career box and make a living (or at least a few bucks) for themselves!

Promote Your Page Too